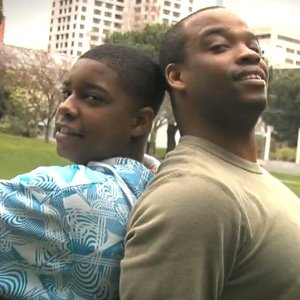 May means graduation time for many Bay Area teens, but for Isaiah, a graduating Little, the road to college was paved with many obstacles. “I used to not listen to teachers, used to do whatever I wanted. I was bad,” Isaiah sheepishly confesses.

Born with drugs in his system due to his mother’s substance abuse, and raised by an adoptive mother who did the best she could – despite the night shifts she worked and the rough neighborhood they called home – Isaiah was headed down a dangerous path.”I didn’t have any resources,” his adoptive  mother Venus says. “I had to get someone to participate in Isaiah’s life, a male figure.”

Things began to turn around when Isaiah was matched with his Big, Anye. They eased into low-pressure meetups, like catching up over a game of basketball, and stayed in touch, talking on the phone. Isaiah would even visit Anye at his office after school where they would work side by side at Anye’s desk, Isaiah catching up on his homework while Anye finished his workday. “I think that’s good,” Anye says. “[Isaiah] can see somebody who maybe he thinks is cool that’s just doing work.”

With the help and support of his Big Brother Anye, Isaiah enrolled in a specialty school. The once-apathetic student now attends class from 7:30am to 5:30pm and will be headed to college in the fall.

Isaiah knows Anye has played a large role in his transformation. “He inspires me to do well and practice when I’m not good at something,” he says of his Big Brother, “to work hard at everything I do.”