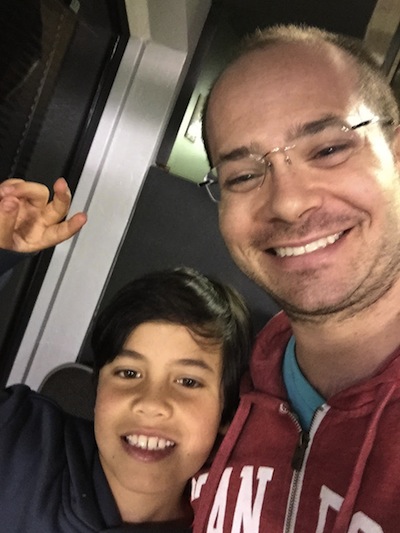 Searching for a more fulfilling volunteer experience, Jordan submitted his application to be a Big Brother. “I was definitely nervous meeting my match and his mother for the first time,” he admits. “I didn’t quite know what they expected from me, and how my skills could best help my Little.”

He was matched with Joseph, an extremely shy 3rd grader who loved video games, PE class, and pizza. Their relationship developed slowly and with much trepidation. “ [It was hard to tell] if I was getting through to my Little,” Jordan confessed, “whether he was hearing the things I was saying. At some moments, I even started to question the match.”

Around the six-month mark, things began to change. Joseph’s mom would tell Jordan how much her son looked forward to their meetings and how much more confident Joseph had become at school. Jordan began to notice a difference in Joseph as well. He found that on longer, simpler outings like tossing a ball in the park or just walking around the neighborhood, Joseph would be more at ease and open up to him.

A turning point came at a Giants game. “We realized our seats were right by the dugout. Instantly, we both became very excited,” Jordan recalls. “I may have even acted more like a Little at that moment than my Little did. Throughout the game, my previously-shy Little had suddenly become very inquisitive about the game. He couldn’t stop asking me questions about the game, the rules, the players—he really tested my knowledge!”

Jordan took this change to heart. “Over a short period of time, you become a very important person in a child’s life,” he tells us. “You become a person the child looks up to, listens to, and depends on for emotional support.”